In 1790 Thomas Patten, owner of the Cheadle Copper and Brass Company, bought the tin plate works at Oakamoor. His intention was to convert the 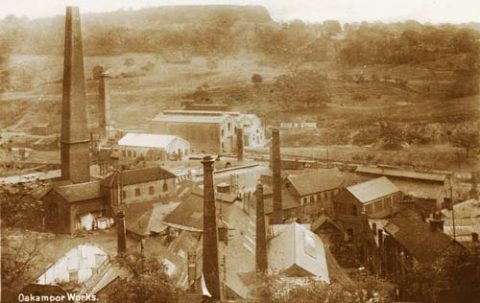 site to the smelting and processing of copper ore and the last tin plating took place in 1793. Copper ore from Ecton was taken to Cheadle, and later Whiston, for smelting. Patten built a wire mill in 1792, followed by othe buildings, culmulating in the “Alton” wire mill of 1827. In 1852 the Oakamoor works were put up for sale.

Thomas Bolton, a copper manufacturer from Birmingham, sent his sons to Oakamoor to buy some plant for their existing works. They returned having bought not just plant, but the entire works!

Morse code, the system for transmitting dots and dashes by electricity, had been invented in 1840 and Alfred Bolton could see the potential of Oakamoor in the burgeoning electrical telegraph industry. The major challenge was to lay a trans-Atlantic cable.

Wire for the first cable was produced at Oakamoor in 1857, when60 tons of copper was drawn. It was laid at the second attempt and carried only 700 messages before it was broken. By 1881 Oakamoor was the most important factory of its kind in Britain, with almost 200 men producing brass and copper in various forms.

The demand for copper fluctuated after 1901, with surges during the two world wars, and by the 1960’s it became apparent that the site a Oakamoor had become redundant. The works closed in 1962 and soon after the factory was razed to the ground. After more than 800 years Oakamoor’s industry fell silent.

Little evidence of this industrial history remains on the site, although the gate posts which once stood either side of the railway are visible in a small copse and some raised stone platforms still exist close to the bridge.