The first reference to Oakamoor is in a legal document of 1337. It appears on a map in 1607 and Robert Plot wrote about it in his natural History of Staffordshire in 1686. The earliest structure is the bridge, built in 1710. Other 18th century buildings include the Lord Nelson (formerly the White Lion) and the Admiral Jervis (named after a colleague of Lord Nelson). 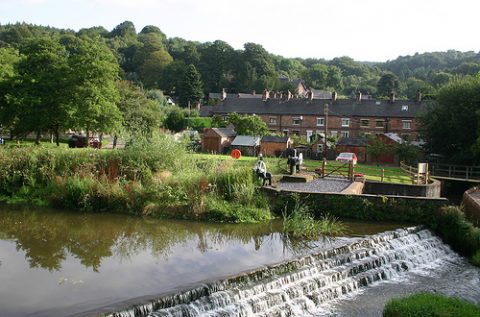 The Cricketer’s Arms was built in the early 19th century as was Sunnyside, the former home of Alfred Bolton. Consecutive owners of the Copper Works, Thomas Patten and Alfred Bolton built most of the remaining houses.

The Bolton’s bought the works in 1852. Twenty five years later, with a rising market for copper products, they began a house building programme that continued until 1922. In addition, Alfred Bolton built the Memorial Free Church in 1878 and two schools in 1876 and 1892.

Thomas Patten also built the Square and Star Brook, which now runs behind the Cricketer’s Arms, used to flow under the Square and into the River Churnet. If you look carefully at the chimney pots of the terrace you will see that the house in the middle is slightly wider and this was the under this that the stream ran. The stream was the boundary between the Kingsley and Alton parishes. When a child was born in this house in the mid-nineteenth century, it is said that the mother would chose to give birth in the room that was in the Kingsley parish as Kingsley offered payments for new born babies!