An Act of Parliament in 1846 authorised the North Staffordshire Railway Company (NSRC) to build a branch line through the Churnet Valley. By 1847 the NSRC had bought out the Caldon, Leek and Uttoxeter canal companies, enabling them to control their competitors and use flat land adjacent to 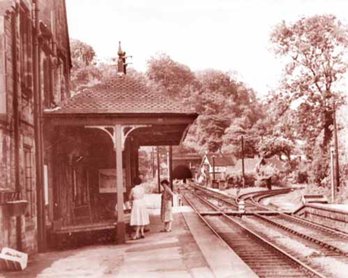 the canal for laying railway tracks. Several tunnels were built through the steep and winding Churnet Valley and the Oakamoor tunnel, at 462 yards, was the longest and wettest in the system.

The crossing keeper’s cottage still stands near the south entrance to the tunnel and across the road from this is “The Island”, a row of houses between the Churnet and mill-race that were built for railway workers. On the site of Oakamoor station only the platform remains. The station house was deliberately burnt down one morning in 1970 and the stone removed for use elsewhere. The station had served Oakamoor from 1849 and saw the building of the “wing” line into the works and the heart of Oakamoor. Here copper workers alighted, Atlantic wire passed through on goods wagons and workers and their families boarded to take trips to Rudyard, Rhyl and Blackpool. The last freight train left on October 3rd 1965.

Today the disused railway track still gives pleasure as a route for ramblers and cyclists.